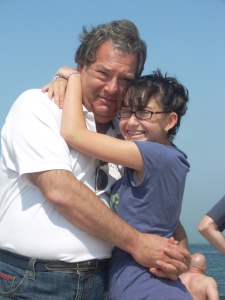 Two peas in a pod -- Basil and Catherine on our 2009 vacation in Cape Cod. We took this photo at Lighthouse Beach in Chatham, and yes, I get a kick out of the bald guy in the background every time I look at this shot!

We have a kind of running gag in the family. Basil and I squabble over one point or another, then look to Catherine for validation and she solemnly declares, “I am Switzerland.”

Last night, however, she broke her silence. Basil offered her full immunity to speak freely.

It all started with a discussion about some of our irritating traits. You know, one of those, ha-ha-we’re-joking-but-we’re-also speaking-the-truth discussions.

Basil had been complaining about a motorist who cut him off on I-287 as he was trying to get on the highway. In typical fashion, he went on and on and on about the encounter, then had some sharp words for the other driver.

“So this is where I get it from,” Catherine said. We had to concede it is true, she is a lot like Basil in this regard. But she also gets other personality markers from me, including the uncanny ability to harp on a subject, asking question after question until I get an answer. (Yes, I just politely described myself as a nag.)

We segued into Basil’s tendency to be passive-aggressive, making comments that he really intends to be requests. I was arguing there was a difference between a recent question he had asked and what he had wanted me to do when Catherine stepped in.

First she made us both promise we wouldn’t interrupt her. Then she offered up the following, with a true teenager’s authority:

“Mom, you’re kind of slow. You don’t always get things right away.”

Her stoic delivery of this epic observation sent the three of us into gales of laughter. Basil spit out his mouthful of beer.

But his turn came. “You expect people to automatically know what you want, and we’re not mind-readers,” she said.

No, but at least one of us is a keen observer! Must be those stellar people-watching skills I passed down.

Wife, mother, communications specialist, Jazzercise instructor and recently reunited adoptee. I'm living out loud -- and trying to make it all work -- in midlife. Having a sense of humor sure helps.
View all posts by Terri S. Vanech »
« Remembering 9/11
All roads lead back home »

One thought on “Switzerland has spoken”