//
you're reading...
Family, Food for thought

All roads lead back home 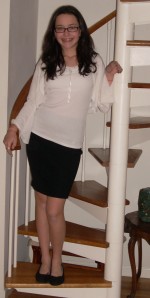 The spirial staircase was a deal-breaker for a lot of people who looked at the house. We thought it was charming -- although it has proved a logistical nightmare and wasn't real toddler-friendly! Here's Catherine headed to her choral concert two Christmases ago.

A new house has moved in across the street. When I went to work on Tuesday, the foundation sat ready, and when I got home, a two-story home was resting atop it.

Even though we knew the house was coming, it took the neighborhood by surprise.

I watched yesterday morning as motorist after motorist slammed on the brakes to look. It’s not a bad-looking house — lots of windows, including a big bay in what must be the living room, and other details to echo the post-war Capes it sits amid. You can tell that they tried to have it fit into the neighborhood when they picked from among the pre-fab choices.

A family with young kids is building it, living a block away while the rest of the pieces are put into place.

Looking at the place got me thinking about the things that make a home, the joy of having my first apartment, the thrill we had when we signed all the papers and checks that make our current house officially ours.

If home is where the heart is, I’ve left pieces of mine strewn in various places, starting with the Putnam Drive place in Port Chester, NY, where I grew up. Even though I didn’t live there anymore, it was so terribly sad to watch my parents sell it. Recently, I discovered it was for sale.

I had a great time looking up the pictures online. The kitchen renovation Dad did was untouched. And there was my room! And the yard where Traci and I waited for hours while Dad leveled a spot for a pool; where we built snow fort; where the family carved up the tree Gloria twisted to the ground in 1985; where I spent my teens coated in Bain de Soleil, listening to the transistor radio and fervently trying to get a tan.

My late 20s brought my first real apartment, a studio in an old rambling home on the Hudson in Yonkers, just over the Hastings-on-Hudson, NY, border. My editor at the time came with me to see the place and what a find it was. TWO closets, a separate kitchen and a little screened-in porch that overlooked the river. All for $400 a month!

I loved that little place, and delighted in my first attempts at housekeeping — making meals, baking Christmas presents, hosting little parties that required everyone to sit on the rug around the coffee table. It was wonderful if you overlooked the old windows that let the winter wind in, and the fact that the rumble of the train left in question the end to any murder mystery you watched on TV.

The house had been carved up into apartments and the tenants were a bit like an East Coast version of the characters from Armistead Maupin‘s “Tales of the City.”

A nutty guy (who I later found in the police blotter arrested for DWI) lived above me and kept trying to ask me out even though he was waaaaay too old and involved with the landlady.

Across the floor from me was a kindly older man who had diabetes and spent long stretches of time in the hospital. He liked to make crafts, and I still have the Christmas trees he created from pine cones and gifted me my first holiday there.

The first floor was occupied by a young couple with an infant son I watched one night so they could go out. They kept an organic garden in the back yard.

The landlady split her time between Florida and a basement apartment in the house. She was kind — sending each of us a Swiss Colony sampler at Christmas. She was also a real character who found it necessary to explain to all who would listen about the botched breast reconstruction that left her lopsided.

Marriage brought me to downtown Greenwich, a third-floor walk-up across from the Ford dealership on Old Field Point Road. There was no sleeping in on car-delivery days. We lived there until I was seven-months pregnant, in a winter where the snow banks got progressively higher as I became rounder and rounder. The landlord was not forgiving about the terms of the lease. We lost the security deposit for packing up a few months early even though we had a very good reason and had alerted him as soon as it became necessary!

Next came a condo across from the Hyatt Regency, into which we brought every Peter Rabbit tchotke and baby item for our precious baby girl. A crazy mold problem, from lack of maintenance to the building’s facade, drove us out and two blocks over to our current home, one of the Capes built after World War II for the returning soldiers.

It’s tiny, but ours, affordable thanks to our status as first-time home buyers in what was then one of two “affordable” areas of town, and due to the spiral staircase that kept the house on the market way too long.

All these years later, there is still much to be fixed and spruced up, but we can’t imagine a house better suited for us. It’s full of love and laughter, good food and better friends, the place where future hopes and dreams are hatched, hurts are nursed and ties are nurtured.

I hope the new folks who move in across the street will lose their hearts here, too.

Wife, mother, communications specialist, Jazzercise instructor and recently reunited adoptee. I'm living out loud -- and trying to make it all work -- in midlife. Having a sense of humor sure helps.
View all posts by Terri S. Vanech »
« Switzerland has spoken
DisneyWorld or bust »