What a day it was yesterday!

I’m still pinching myself after meeting a bunch of cousins, cousins-in-law and an aunt and uncle at the BBQ my brother, Chris, and his wife, Jill, hosted to introduce me to everyone.

It was an amazing day — picture-perfect weather and lots of fun. My mind is racing as I try to take it all in, and I expect I will be off-kilter all week as I try to process the information, the people, the outpouring of affection I was so fortunate to experience.

More than 40 people turned out for the party, several families making treks from far away. The guests included some of Chris’ friends, to whom he introduced me with great pride.

My first mother, Pat, couldn’t wait to make introductions as guests arrived. “This is my daughter,” she said each time before quickly motioning to Catherine and adding, “And this is my granddaughter.”

Several relatives brought family photos to show me. One cousin and his wife made copies of a bunch for me and others to take home, and spent time before guests arrived explaining who was in the pictures.

Cousin-in-law Maggie tearfully gifted me a Hummel figurine that had belonged to my grandmother. The little girl depicted is holding a daisy; ironically, the name on the base is “First Bloom.”

Maggie explained that several years ago, Grandma Clark asked her and my cousin Michael to choose three figurines for their own. They gave one to another relative some time ago, and Maggie wanted me to have one as well.

It was one of many wet-eyed moments that day, perhaps the biggest being when I finally met Aunt Florence, the first family member I contacted back in January when I couldn’t reach Pat.

Turns out, Flo has witnessed both ends of the timeline.

Pat stayed with Flo and Flo’s husband, Bob, in California for a while when she was expecting me. And Flo was the final link, connecting Pat and I at last. We both burst into tears as soon as we caught sight of each other.

Uncle Bob later reminded me that I had been a guest in his home once already, and said he hoped he would see me again soon.

And while there were emotional moments, the afternoon and late into the night were mostly filled with laughter and stories. I learned about Pat’s parents, grandparents and siblings. Treasured family anecdotes were unwrapped for my benefit. I was able to watch siblings and cousins tease each other as they have many times before.

Catherine bonded with Rebecca, a cousin who shares her birthday. Driving home, she said she can’t wait to see Rebecca again.

Basil, too, had a good time. Chris marveled over breakfast today that Basil was so comfortable talking with a back yard full of strangers.

Of course there were pictures, some candid and a whole sitting where Chris’ friends generously took turns handling everyone’s cameras while we attempted to organize ourselves.

Here we are a little more organized (love the friend’s kid photo-bombing us) I don’t have it on my camera, but there is also one of these with Basil stretched out on the grass in front of us.

Here I am with Pat:

And here with Chris and Pat: 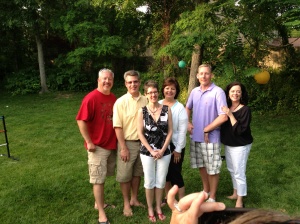 And here is Catherine with Laura, the adopted daughter of my cousin, Susan, and her husband, John. 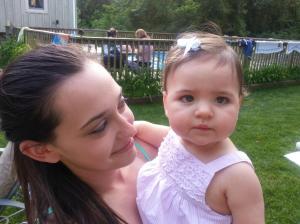 Cousin Florrie’s husband, Eddie, was one of several people to thank me for finding the family.

When I explained that I was compelled to search, he and Florrie said, “You complete us, too.”