Digging around for a picture to run this morning, I stumbled on this one of Basil, from January 1988. 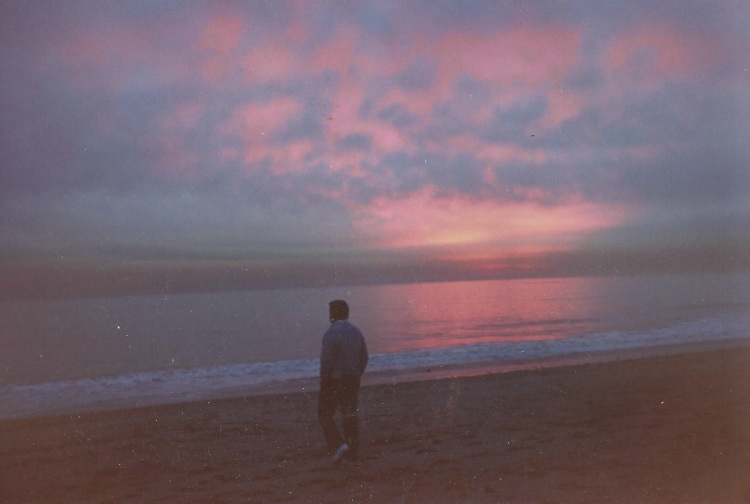 Basil on the beach in California in 1988. I wasn’t smart enough to note WHERE we were when I took this shot.

We were in California after Christmas to visit a childhood friend and her husband who — still  — live in Burbank. They were kind enough to show us the sights, take us to Universal Pictures so we could experience a bit of behind-the-scenes movie fun and treat us to dinner. We stayed with them briefly. then set off on our own.

Have rental car; will travel. We hit Hollywood Boulevard, counted up the stars on the sidewalk; tried to mold our hands and feet in the manner of so many stars and starlets outside Mann’s Chinese Theater; and yes, even visited Frederick’s of Hollywood, ’cause, well, why not.

Soon we were driving in the desert, past the stands of wind turbines, to San Diego, where we went to the zoo and found a place to stay. Exhausted from all those miles, I tucked in to a good book. Basil spent time at the bar. I learned later he’d been talking with a bunch of Hell’s Angels.

We rang in the new year at a Greek restaurant called Zorba’s where the food never stopped and the locals danced and broke plates until the wee hours.

Sometime along the way, we rode along a stretch of the Pacific Coast Highway, stopping from time to time to stretch our legs on the beach.

We returned home on a red-eye to a blizzard, the car buried and us in a desperate race to get Basil to work at the Greenwich Post Office.

With nothing but a collapsible shovel in the trunk with which to dig, in no time, our West Coast adventure was but a memory.

Wife, mother, communications specialist, Jazzercise instructor and recently reunited adoptee. I'm living out loud -- and trying to make it all work -- in midlife. Having a sense of humor sure helps.
View all posts by Terri S. Vanech »
« Wordless Wednesday — Last Gasp (We Hope)
The Secret of the Hidden Staircase »