I had a set of plans for this dull, rainy Saturday. The universe had other ideas.

Oh, I managed to teach Jazzercise, get the house cleaned and run to CVS.

Then I thought I’d be REALLY smart and take the comforter to the laundromat instead of laying out a ton of money to have the cleaners launder it. What could it take? An hour or so, then I’d be home again, make a cup of tea and dig in to the files and piles of papers we have been culling this past week.

(Nothing like finally parting with a 14-year-old receipt for a vacuum you no longer own to make you feel accomplished.)

Turned out my big idea was really a … well … queen-sized disaster.

I had no inkling of that as I went through the house collecting quarters, however.

The laundromat was quiet save for the rain pounding on the sidewalk outside. The only other customers were a mother and young son, and an older woman who couldn’t help but straighten up the place while her laundry went around in circles.

I got a machine set up and tucked into my library book, a bunch of short stories by Alice Munroe (the tempo of which was a good match for my attention span) and waited.

The machines were mesmerizing. Occasionally, I found myself lost watching the odd spin cycle, and would tear my eyes from the suds and back to the book in my lap.

About the time the comforter was getting its final rinse, a young couple arrived, several loads in tow, and set to work, chatting all the while. Years ago, I kept the same Saturday schedule, lugging my laundry to a laundromat in Hastings-on-Hudson, NY, that offered especially entertaining people watching.

I greeted the end of the wash cycle with relief — halfway there! But that quickly turned to consternation. All the batting had bunched up into the center of the blasted coverlet.

After some vain attempts at smoothing it, I threw the thing in the dryer and hoped for the best, dimly remembering a Heloise hint about adding tennis balls to a load to avoid this sort of thing.

Back across the room with my book, I did not see the chatty man until it was too late.

“What are you reading?” he wanted to know.

Despite the increasing irritation caused by the rain and the bunching comforter, I did not say,”Well, nothing now,” sorely tempted though I was.

I tried keeping the book open on my lap, a sort of gentle hint, but it was no use. I heard about the plots of two books he’d read recently, as well as the entire storyline of movie he’d been to see. I learned that he worked in construction; was colder this damp, rainy day than he expected to be; and that he hates cell phones.

He folded while he talked.

One shirt, then another.

A T-shirt, sheets, a couple of hand towels.

No socks, but a pile of black and gray Hanes briefs, which I couldn’t help but notice despite the great pains I took to maintain eye contact while he nattered on and on. I kept thinking, “What IS the etiquette for this particular occasion?”

Though I made a special effort to keep my left ring finger visible, it didn’t seem to matter.

Baseball Cap wasn’t trying to pick me up — he never even told me his name. I guess he was just lonely.

Still, I leapt across the room as my big ball of batting stopped spinning its way through the dryer, the four corners of the thing as useless as shirt sleeves flapping on a clothesline.

Baseball Cap went on his way and I again tried to reorganize the mound of cotton before finally giving up.

The rest of the day was spent not clearing file drawers, but traipsing from one store to another in search of a new comforter, then retracing my steps in search of Basil, who at 58 years old still cannot stay with the group on an outing.

I like this bedroom ensemble a whole lot better than the one I ruined.

Naturally, I’ll be bringing it to the cleaners to be laundered. 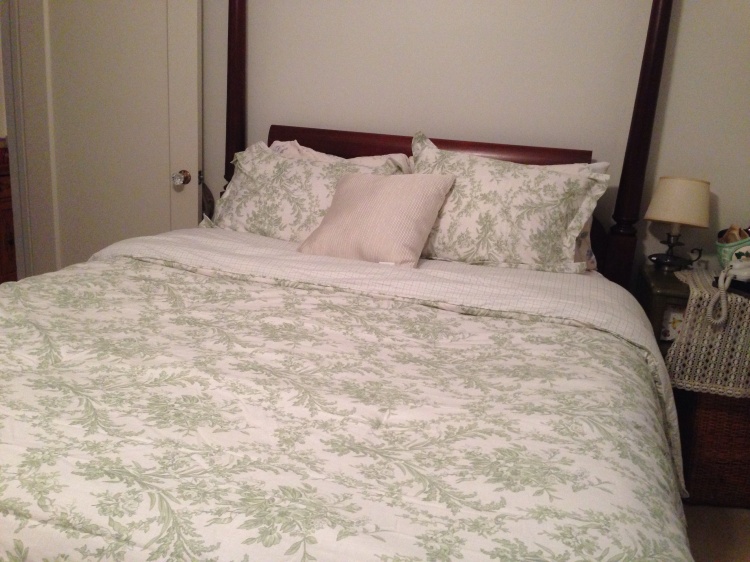 Wife, mother, communications specialist, Jazzercise instructor and recently reunited adoptee. I'm living out loud -- and trying to make it all work -- in midlife. Having a sense of humor sure helps.
View all posts by Terri S. Vanech »
« Flashback Friday — Shopped til I dropped
Recipe for a Rainy Sunday »