Once again, you can’t make this stuff up.

I was at AAA in Stamford, CT, today to renew my driver’s license, looking to get a “verified” version with its extra-special star and identity protection.

Except the bureaucrat there — I’ll call him “AAA Guy” — changed my identity.

Yup; another set of bureaucrats in another state gave me a new name. 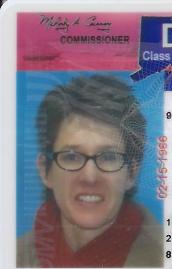 The first time this happened, I was an infant and the Great State of New York was making over my identity as part of my adoption.

Today I’m a supporter of the fights by New York’s Unsealed Initiative and Access Connecticut to overturn their respective state laws so adult adoptees have access to their original birth certificates. It’s time to end the secrets and lies, and give adoptees access to their true heritage and medical information.

But that wasn’t on my mind as I raced to tick off this chore and get back to work.

AAA Guy troubled himself to stop eating his lunch and adjust the volume on his Sirius stream of ’70s R&B.

He spent an overlong time looking at my birth certificate, which gave me butterflies. I wouldn’t be the first adoptee whose birth certificate caused a problem with the folks who generate red tape.

Turns out that wasn’t an issue. The problem was my name.

AAA Guy kept going over all the documents, making smart remarks the entire time. Basil, who had come along for the ride, stood a little taller and loomed a little larger over the counter.

After a bit of silence, AAA Guy said, “You won’t have the S.”

The “S.” is part of my name, dammit. It became my middle initial when I married because I didn’t have one before then. I changed it with AAA Guy’s Social Security counterpart 20 years ago.

Some stupid rule says that they have to go with the originating documents — birth and marriage certificates — for verified licenses.

If I wanted a verified license, I would simply be Terri Vanech on it.

If I wanted to keep my S., I had to stick with the plain vanilla ID.

No amount of arguing worked.

AAA Guy dismissed my insistence that my legal name is Terri Salvatore Vanech.

“This,” he said, motioning to my birth certificate, “is who you used to be.”

Then, pointing to the marriage certificate, he said, “And this is who you are now.

What the hell not?

Wife, mother, communications specialist, Jazzercise instructor and recently reunited adoptee. I'm living out loud -- and trying to make it all work -- in midlife. Having a sense of humor sure helps.
View all posts by Terri S. Vanech »
« Look Out World!
Flashback Friday — A Walk on the Beach »