I was “Chopped” in my own kitchen today. Back-to-back baking disasters unlike I’ve had in a long, long time.

Usually, I can whip up sweets in my sleep. Not today. Everything I touched was far less than palate-pleasing.

Of course I was rushing, multitasking, racing to get back to that (I only wish it was) imaginary stack of spinning plates (er, pressing matters) I always seem to have going like one of the crowd-pleasing acts on The Ed Sullivan Show. (Or is that shew?)

I was making desserts to bring to a dinner with friends. While cleaning the house, taking care of some work tasks and doing a bit of laundry.

It was a typical Saturday after all.

About the time I pulled the first hot mess from the oven, I learned the dinner would be rescheduled. Not on account of my lack of baking prowess, but because of the host’s ill health. I hope he is feeling better very soon.

Meanwhile, it’s a good thing I didn’t have to show off my piecemeal blueberry cake. 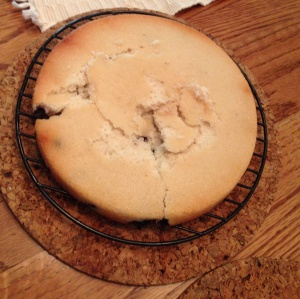 Blueberry Cake — maybe I should call it Blueberry Crumble.

No amount of confectioners’ sugar would hide the cracks and wayward hunks I tried to reattach after scooping them from where they stuck in the pan. It’s one of the hazards of baking without eggs (Catherine is allergic).

I promise it tastes just fine. As long as you eat it with your eyes closed.

And I didn’t have to try to plate the charred Palmiers, either.

Catherine and I took one for the team and ate some of the burned ones on this pan. But a bunch (like those two in the lower part of the photo) were too far gone, even for us to try. They sit in the bottom of the garbage pail now.

The second pan of Palmiers fared much better, thank goodness. Catherine’s been working her way through them all day long.

As for me, I’ll pass on dessert tonight; thanks anyway.

Wife, mother, communications specialist, Jazzercise instructor and recently reunited adoptee. I'm living out loud -- and trying to make it all work -- in midlife. Having a sense of humor sure helps.
View all posts by Terri S. Vanech »
« Flashback Friday: The Roar of the Greasepaint, the Smell of the Crowd
The Staff of Life »

12 thoughts on “Recipes for failure”