No meeting of the minds

Well, we threw a reunion committee meeting last night and (almost) no one came.

Just me, John and his girlfriend, Kay — who had been to elementary school with us, and whose family later moved out of town.

Not sure if it was just a bad night for planning or if this was a proverbial “kick me” sign for those of us picked-last kids from the Port Chester Class of 1984. Facebook showed us a bunch of classmates were at some gathering in Stamford.

Still, the three of us had a good time, reminiscing about our days at King Street Elementary School; marveling over the fates of our three famous classmates — David Tutera, Sandra Taylor and Jonathan DelArco; catching up … and wondering where the hell everyone else was.

Particularly notable was the clarity with which we remembered our elementary school activities — the games at recess, the teachers and classmates, that time the deer ran through a second-grade classroom, the merry-go-round on which we girls could do flips (if we were wearing body suits!), the basket-weaving unit in art, the ice storm that allowed us to walk on top of the snow in the playground without sinking in.

I even had them laughing with my rendition of one of the songs from our bicentennial revue (Connecticut are you for independence? Are you for the pursuit of happiness? For life and liberty and freedom… Connecticut votes YES!).

In my mind’s eye, I see a whole bunch of KSS classmates humming along. Sure wish I’d seen you last night.

Don’t know what will happen next. Maybe there won’t be a 30th, and that’s OK, I guess. We are now all so busy with family obligations, kids going off to college, work and heaven knows what.

To commemorate the occasion, Kay snapped a couple of pictures.

As you can see, all these years later, John is still wearing his hair like mine. 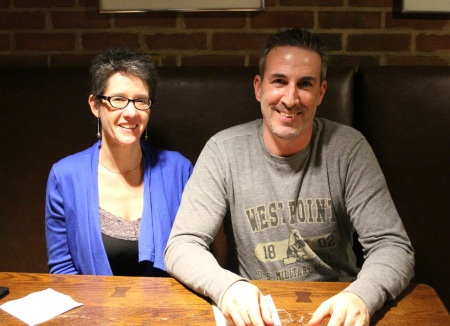 Wife, mother, communications specialist, Jazzercise instructor and recently reunited adoptee. I'm living out loud -- and trying to make it all work -- in midlife. Having a sense of humor sure helps.
View all posts by Terri S. Vanech »
« Flashback Friday — Gotta Dance
Why adoptees search »

3 thoughts on “No meeting of the minds”