Blame it on the pie

Hindsight being 20/20, it’s all clear to me now: I should have known better.

It should have been obvious that no amount of early shopping forays, wrapping on Thanksgiving or freezing a bunch of cookie dough would stave off my annual December meltdown.

I hung in there pretty well for a long time. But I got smug.

I scrolled past others’ desperate Facebook posts about the seasonal stress and gave myself a little fist pump. I read a novel at night, worked the crosswords, took time to — gasp — enjoy my tea while it was still hot.

And in so doing I never noticed the Stress of Christmas Present creeping up behind me. Until it was too late.

Friday night, I clamped the laptop cover shut and went to work. Basil’s family was coming for an early Christmas celebration the next day and I had work to do. Toilets to clean, a vacuum to run, a pie to bake.

No worries. I’d blitz through this with my eyes closed. We were eating dinner at a restaurant, so I only had dessert to worry about.

I made the pie, slipped it into the oven and went on to the next thing, determined to leave as little prep as possible for the next morning, when I had a Jazzercise class to teach at 8:30.

Not so sweet stuff.

When I returned to the kitchen, it was hard to see the oven for all the smoke that had filled the room.

The blasted pie had boiled over and the oven floor was alive with burned molten sugar volcanos.

The words I said and texted to my mother were not in keeping with the holiday spirit.

Alone in the house, which now reeked of burnt sugar, I opened the windows, turned on the exhaust fan and hoped that the pie had actually baked. By the time the oven cleaned, it would be too late to start over. And with three kids with food allergies, a store-bought pie was out of the question.

Then I prayed that together with the platter of Christmas cookies, homemade candy, fruit and ice cream that we had enough for dessert if the pie was awful.

I texted Basil to point me to the oven directions so I could start a self-clean cycle after I scraped up the hot black goo.

However, having recently discovered that we can email our printer directly, he was sending me photos from his current location — in front of the urinals in the men’s room of the restaurant he’d stopped in — and asking if I’d seen them and wasn’t he funny.

I said more words that were not in keeping with the season.

My text asking for him to come home and help with the cleanup went unanswered.

By now, I wasn’t even swearing anymore.

Later, as I sat on the couch while the oven cleaned itself — the air thick with an acrid burnt sugar smell despite having every window in the house open — Basil said he figured he’d only get yelled at if he came home, so he decided to give me a wide berth.

I know that sounds cold, but even I could see the logic behind his reasoning.

You’re wondering about the pie? The family said it was the best one I’d ever made. 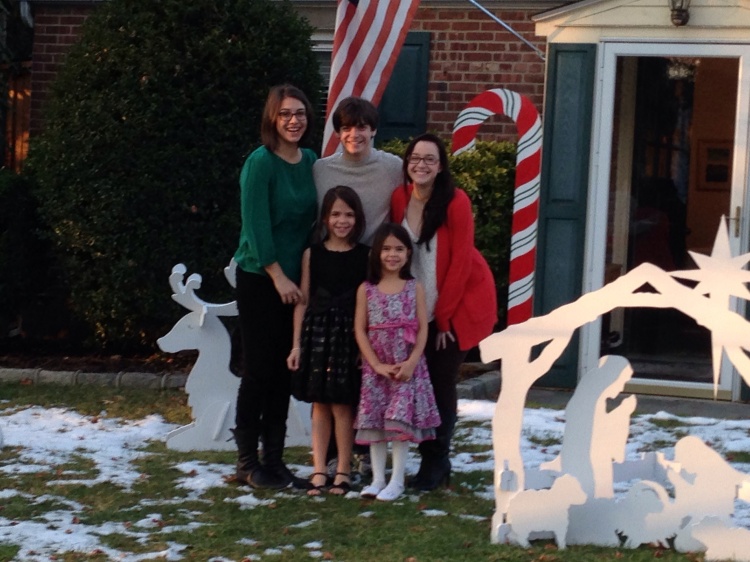 The cousins — before the pie.

Wife, mother, communications specialist, Jazzercise instructor and recently reunited adoptee. I'm living out loud -- and trying to make it all work -- in midlife. Having a sense of humor sure helps.
View all posts by Terri S. Vanech »
« Flashback Friday — Ghosts of Christmas Past
Merry Christmas! »