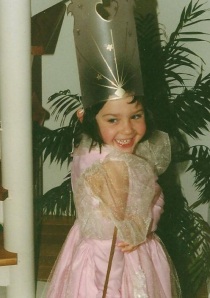 What are you going to be for Halloween?

I’ve got no costume planned (some might tell you I’m a witch all year anyway), but I cannot wait for tomorrow.

Despite being a scaredy-cat, I retain a childlike love for Halloween. These days I get a big kick out of seeing the little ones in the neighborhood, and I’m not going to let a little snow spoil the celebration.

We’ve got our blinking eyeball lights winking in the bushes and the pumpkins in the yard. Two big bags of candy are at the ready and the CD of spooky tunes has been dusted off to be played starting as soon as I get home from work.

Growing up, my Mom always made Halloween extra fun. We could always count on getting a couple of good frights, too.

Our usual trick or treating routine involved visiting my uncle’s house, where Halloween was practically a High Holiday. You never knew how Uncle Richard would be dressed, or where he would creep up or around from as you traversed the porch in search of your candy. I usually pushed my younger sister, Traci, ahead of me so she’d get the first impression. (Sorry, Traci.)

I did the same at our neighbors’. Even though we typically helped create the stuffed dummy that “Uncle” Ralph dropped on a rope from a second story window in front of unsuspecting (or eagerly anticipating) trick-or-treaters, it scared the hell out of us every time. (It was great fun to help scare the kids who followed us, though.)

By far, the best part of Halloween was dressing up, however. I remember long, costume-planning discussions among friends, weeks in advance so we’d make a good showing at King Street School’s annual Halloween parade. Unlike kids today, most of us made our getups, and I was lucky to have help from my Mom, who is a terrific seamstress and amazingly creative.

My favorite of all time is probably the sky-blue Damsel costume, with its pointed hat and trailing veil that I wore probably in third grade. A touch of Mom’s lipstick and eye makeup sealed the deal. I was divinely beautiful.

Most often, though, Halloween meant going through the closets and putting together odds and ends. I remember a gypsy costume, brought together with one of mom’s scarfs and clip-on earrings; being a bum one year in an old felt hat, my overalls, a “hang-10” sweatshirt and a dimestore false nose and glasses; and the ghost costume crafted Peanuts-style from an old sheet and whiteface courtesy of cornstarch from the kitchen cabinet.

Catherine as Spaghetti and Meatballs.

As you might suspect, I was eager to pass my love of costume design on to Catherine. When she was tiny, Mom sewed her terrific costumes — a Bunny, a Pumpkin, Piglet, a delightful fairy dress (with a gold wand courtesy of Dad’s stellar wood-working skills).

By the time Catherine was in second grade, I was eager to involve her in the preparations. Family Fun magazine showed a Spaghetti and Meatballs costume that was super easy and soooooo very clever.

Together we painted styrofoam balls brown and hot-glued them to a red sweat suit. We used off-white yarn and the kitchen colander to craft a “wig,” then painted her face red. As you can see from the photo, it was a thing of beauty, a crowning achievement. The BEST costume ever.

It got a fabulous reception from the other families at the annual Halloween fete at the International School at Dundee, and I was feeling very pleased with our effort. However, Catherine took one look at the store-bought costumes the other kids were wearing, and decided she hated hers. It was to be my last year of making her costume.

Go figure, though. This year, she and her friend are making their cat costumes, wearing some of their own clothes and accessorizing with inexpensive ears, makeup and false eyelashes. It took almost 16 years, but she finally caught my enthusiasm.

Wife, mother, communications specialist, Jazzercise instructor and recently reunited adoptee. I'm living out loud -- and trying to make it all work -- in midlife. Having a sense of humor sure helps.
View all posts by Terri S. Vanech »
« Roar emotion
Train reactions »